Chapter 1
The first years:
innovating together

Looking back at the start of the Top Sector Policy

The Netherlands has a unique tradition in the field of cooperation between government, knowledge institutions and industry: the triple helix. In this “golden triangle”, the government stimulates, facilitates and finances public-private partnerships through financial and policy-based arrangements. Moreover, the government regularly acts as a customer and launching customer in (new) markets. In this way, the government stimulates the interaction between the business community and knowledge institutions, resulting in innovative products and services.

The brochure “From Policy to Impact”  provides an overview of the development and impact of  Top Sector Life Sciences & Health.

Read the anthology and get inspired!

The synergy in the “golden triangle” was intensified in the “Top Sector Policy” of 2011. The ten top sectors are areas in which the Dutch knowledge economy has traditionally been strong. Thanks to the top sectors, the knowledge base has been further expanded and the contacts within the triple helix have led to new activities, new products and services and solutions for societal challenges. This resulted in strategic national public-private partnerships, which work together on specific topics such as AI, microplastics and oncology, which are characteristic of the current Dutch knowledge and innovation infrastructure.

Within the triple helix, people have learned a lot from each other and it became increasingly common for citizens to participate as a coalition partner in their role as end-users. Since 2015, the business community has been increasingly involved in investments in research and development (R&D). This has further increased the innovative power of the Netherlands. In addition, the top sectors have jointly devoted attention to human capital, valorisation and market creation. For example, every top sector has built a well-coordinated public-private innovation ecosystem in recent years. Thanks to the coordination between social needs, knowledge and economic activities, products and services are created that are also internationally competitive.

Thanks to the top sectors, the knowledge base has been further expanded and the contacts within the triple helix have led to new activities, new products and services and solutions for societal challenges

Oncode Institute: outsmarting cancer through scientific excellence and a unique approach to collaboration

Cancer has been the number one cause of death in the Netherlands since 2008. Therefore, extensive research is being done to find out more about this disease and to ultimately find a cure. Oncode Institute is a strong collaborator in trying to reach this goal. They are striving for “outsmarting cancer and impacting lives”. In doing so, they take a unique approach: fostering scientific excellence and then bringing breakthrough innovations that arise from basic research to patients and society, twice as fast than the current pace. Ton Rijnders, former general director of Oncode Institute, believes that ‘Oncode Institute has a great chance to make a significant contribution to improving the treatment of cancer patients’. In which innovative ways is Oncode Institute trying to do this? Read further to find out.

Collaboration at the core

Oncode Institute is a public-private partnership (PPP); therefore, collaboration is at its core. ‘The fundamental idea behind Oncode Institute is that the competition model does not work well for finding new breakthrough therapies for cancer and that you need to far more actively stimulate collaboration between basic researchers, clinicians and companies. Such an approach, for example, enables technologies to be made available for everyone instead of just one group within Oncode Institute. You make materials and your data available to everyone. Furthermore, there is a very low-threshold exchange of both issues and results to achieve collaboration.’

Rijnders believes that ultimately, Oncode Institute’s goals will only be realised through collaboration, nationally, internationally and with all possible parties. ‘That’s why Oncode Institute has a long-term perspective, because this cannot be achieved in just 2 to 3 years. It will take a while. Oncode therefore takes a step-by-step approach; the first milestone was getting Oncode Institute off the ground and realising collaboration in the Netherlands (e.g. European Lead Factory, Pivot Park, Lygature). Now we are looking towards Europe (with an IMI project) and ultimately worldwide.’

Rijnders believes that ultimately, Oncode Institute’s goals will only be realised through collaboration 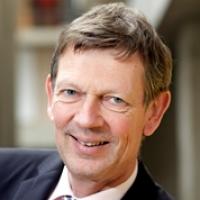 ‘The fundamental idea behind Oncode Institute is that the competition model does not work well for finding new breakthrough therapies for cancer.'

Rijnders recognises Oncode Institute’s contribution to the Mission-Driven Top Sectors and Innovation Policy, especially to the first half of the central mission. ‘Five more years of healthy life by 2040 is definitely what we stand for. And we believe there are three means to achieve this. First, improved diagnostics, secondly, more precise therapy and thirdly affordable therapy (making it accessible for everyone). True innovation in these fields starts with investing in basic research.

Moreover, if you look at what current cancer treatments are aiming for, it is mainly about giving the patient a much better quality of life on top of longer survival chances. Radiation therapies with chemotherapy have really serious side effects that have a considerable impact on the quality of life. The ambition is to realise far more targeted therapies so that the quality of life is considerably higher, and thereby contribute to mission III.’

Rijnders has been at the Oncode Institute since its establishment in 2018 and will pass on the baton to Alain Kummer. Rijnders now shares his expertise and lessons learned in setting up and managing a PPP. ‘My first lesson learned is; don’t try to reinvent the wheel. In the Netherlands, there is more than ten years of experience in establishing PPPs and getting them off the ground efficiently. Make use of that knowledge which is already available!

Moreover, bear in mind that PPPs thrive when everyone is genuinely interested in each other’s research and sees that as a fruitful opportunity that can benefit everyone. That must be the basis, and from there you can build these types of collaborations.’ Hopefully, as a result of these collaborations, we will one day be able to unravel the mysteries of cancer and ultimately find a cure.

The winners of the Venture Challenge 2020

Already at the start of the Top Sector policy the Venture Challenge was an important programme to help startups further develop their business case. This year’s winners of the Venture Challenge Summer and Fall editions were uniquely announced in front of an online audience at the Dutch Life Sciences Conference. The proud winner of the Summer edition is PacingCure and the winner of the Fall edition is SLAM Orthopedics. Congratulations to the both of you!

According to the jury, PacingCure is addressing a highly unmet medical need that they can target with their gene therapy. They have identified a clear first orphan indication to prove their technique. Moreover, they are a very experienced team of clinicians. The jury believes that SLAM Orthopedic is addressing a real need as experienced by orthopaedic surgeons on a daily basis. They have a clear value proposition on which they can expand in the future.

The applications for the Venture Challenge Spring 2021 are open! From 3 December 2020 until 12 January 2021, you can sign up. The specialised coaching in the Venture Challenge focuses on developing your initial idea into a solid business case during a series of bootcamps and 1-on-1 coaching and mentoring sessions. Startup teams learn to identify key risks, analyse customer value propositions, develop a validation strategy, learn to build a venture plan and, ultimately, get connected to Life Sciences experts, investors and seasoned entrepreneurs. Read more.

Hanno Tan of PacingCure: ‘PacingCure’s ambition to bring precision gene therapies for the heart to the patients who urgently need them has been vastly boosted by the Venture Challenge.’

Bart Kölling of SLAM Orthopedic: ‘The Venture Challenge lived up to its name, as the programme challenged us to analyse all aspects of our venture and helped us focus on improving our strategy and our message. We would like to thank the organisers and the other teams for the great online and offline sessions, and we are of course extremely happy to have been chosen as the winner!’

From spin-off to international player

Quirem Medical, a spin-off from the University Medical Centre Utrecht, was acquired by Terumo Corporation in July 2020 for 20 million Euros. Quirem Medical develops and commercialises holmium-166 radioactive microspheres for Selective Internal Radiation Therapy (SIRT). The company believes that treatment outcomes for unresectable liver cancer with SIRT can be improved through the use of microspheres

that can be visualised and quantified to improve patient selection, treatment planning and treatment verification. The platform is currently available in Europe, the Middle East and Africa. Terumo plans to launch the platform globally in the coming years. Therefore, Quirem Medical is a great example of how a spin-off develops into an international player.

Prepare your startup for growth!

Prepare your startup for growth

To acquire the desired expert knowledge to further develop the product, Quirem Medical applied for the Value Centre Voucher of LS@W Accelerator. ‘The voucher makes it easier to accelerate decisions and the Value Centre can help a with the needed network and partners,’ says Jan Sigger.

Do you want to speed up the development to a successful market introduction? Join the Medtech and Biotech Meetings or apply for a Value Voucher! 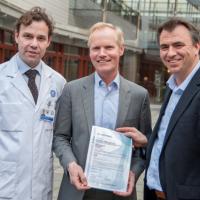 ‘We are very excited about Terumo’s acquisition of Quirem Medical. This will drive global adoption of our unique product offering and accelerate our pace of innovation, reaching more patients who will benefit from our technology’,